Want to save the world? 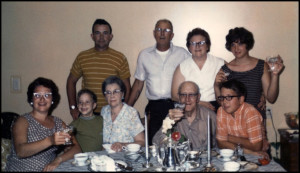 Forget the Republicans (founded in 1854) and Democrats (in power since 1828, the world’s oldest active political party)! They have devolved into mere syndicates, whose sole mission is to broker and peddle power. As such, they no longer point the way forward; instead, they block progress and hold us all back. This calcified two-party system impedes local involvement in the political process by those not backed by party hacks or millions of dollars. It deters political narratives that contradict narrow, reactionary partisan lines. The two dominating parties inhibit grassroots citizen action and control. They are the problem, not the solution—and must go, now.

Instead of following two monoliths that cultivate gridlock, it’s time ordinary citizens lead our country’s development with hundreds, thousands of mini-parties. It’s time to meet, to get to know each other, to sink social roots into our neighborhoods, to build community bonds—to cease being voiceless by speaking together.

That’s a grand vision—and easily sold—but how might a local “party” look and function? How would it dovetail with other local parties within the same area, in a region, state, nation or even across national borders? What follows is a template—one meant to be tweaked, improved upon… or fully abandoned. It is idealized and meant only as “yeast” for local circles of neighbors to throw parties of their own.

A given local Heartland Party can meet weekly, bi-weekly or monthly, but in order to qualify to send representatives to a regional or other larger gathering, it must hold a “meeting for business” at least once a month: Other meetings in a given month can be purely social (a potluck, concert, exhibit, demo, film night, hike, quilting bee, etc.), but a group calling itself a Heartland Party must convene “business” at least monthly.

We strive for a renewed, for a better world—but we don’t have it yet. Until then, deliberate structures can help keep local Heartland Parties from becoming co-opted by special-interest or outside elements. The requirement to be present by the logging of attenders at 7PM, for one, keeps those not interested in breaking bread or otherwise getting to know their neighbors from using the post-potluck proceedings for purely self-serving reasons. Also, the requirement that a new attender of a given local party attend two events as an observer before being able to vote at a third meeting discourages “vote grazing” or “issue carpet-bagging.” And, the requirement that a standing member attend at least two of every three meetings helps assure that those who vote genuinely are part of on-going processes of discussion and discernment over time—not just as opportunists “dropping in” only to influence a vote, then leave.

Regarding the initiation of a new local Heartland Party and the naming of same, consider: more ...

Simply invite 10 neighbors over for a potluck or some other socializing, sans “business.” At some point, tell those gathered that you’d like to meet once a week for the following two weeks to explore establishing a local Heartland Party—and invite each person present to bring up to 10 other local residents with them next time. As of the third meeting, follow the template provided, above, to establish a set of voters (individuals who had attended at least one of the previous gatherings and now the third, the new group’s first “meeting for business”) and begin considering matters of local interest, with a goal of building pure-majority consensus and support for collective action.

As for a name, remember that an ultimate goal is for each community to have one, better several “monthly meetings” in order to form consensus and then send representatives to “quarterly” or other larger-catchment-area gatherings. Thus, a name should be as specific as possible, perhaps named after the main street running through the surrounding neighborhood (West Hague Heartland Party/Newton) or the neighborhood’s name itself (Merriam Park Heartland Party/St. Paul): The addition of the town’s name at the end of the monthly-meeting party’s name avoids a confusing repetition of place names.

A local Heartland Party can weld great influence—particularly locally. To move more, more widely, send representatives to “quarterly meetings” held every three months, consisting of numerous “monthly meetings” in a given area—a metropolitan area (such as Greater Des Moines) or region (“Little Switzerland” in Northeast Iowa); to “half-yearly meetings” held every six months at a state or interstate level (for ex., representatives from quarterly meetings in Iowa north of Interstate 80 and in Minnesota south of the Minnesota River Valley); and to “yearly meetings” representing half-yearly meetings in a larger region (such as those in the Upper Midwest, consisting of Iowa, Minnesota and Wisconsin, or the Upper-Mississippi-River Watershed, etc.). At some point, the evolution of the Heartland Parties network will extend beyond political or biospheric regions and include yearly meetings serving half-yearly meetings in, say, the Upper Midwest and Lower Ontario/Manitoba. Of singular value will be regional meetings based on biospheres: watersheds, forests, etc.

Who may serve as representatives beyond the monthly-meeting level? Neighborhood-based monthly meetings need to be accessible to as many local residents as possible, but quarter, semi-yearly and yearly meetings need to assure that special interests don’t co-opt them, that professional politicos don’t block ordinary citizens from exercising direct control over their affairs or Heartland-Party-supported initiatives. For that reason, while individuals participating in monthly meetings should attend at least two of every three parties to be able to vote on a specific matter, representatives chosen by the pure majority of their monthly meeting to represent that party at a higher level should have attended at least three of the previous five local business meetings, immediately prior to an up-coming higher-level meeting. A representative delegation should include women and men, young adults and senior citizens, people of European descent as well as those of other origins.