My people came to America as of 1630 and to Iowa as of the 1830s. While they held diverse jobs along the way, they primarily worked the land as farmers or—later, in the Dakotas—as ranchers. Born in 1962, I grew up on Ashlawn Farm, the quarter-section my family stewarded for 105 years between Mason City and Clear Lake. I loved being on that farm, where three generations lived together: Our roots ran deep.

As a boy I devoured books about history and faraway lands, famous people and current issues. An honor student, I earned awards for church and writing competitions, and to National History Day—twice. I also won the top place at a speech contest on “Soil and Water: Our Key to the Future.” I angered many local farmers by criticizing the sole use of moldboard plows and advocating low- or even no-till cultivation. Old Timers said “What you’re peddling will never come to pass. Moldboards are here to stay.” Well…

like my mother before me, I crossed “the color line” of Northcentral Iowa by having close friends who were African-American, Hispanic, Laotian or of backgrounds besides my own. At that time, such color-blindedness was not a given, as racism was still the norm for too many rural Iowans. Despite resistance from community members, I organized language classes and outings for refugees. When even relatives warned “Don’t get too close to them, as they aren’t Christians,” I walked away.

Coming from a long line of Methodists dating back at least to the 1850s, as I high schooler for a time I wanted to become a United Methodist pastor and go on assignment to refugee camps in Southeast Asia. I also considered carrying on our family’s tradition of farming, but in the 1980s that seemed impossible. I watched, pained, as Iowa farm families fell like flies, one by one, alone and seemingly with no recourse.

Life had different plans, anyway, and I accepted a Rotary International award to attend an all-boy school in Skipton, North Yorkshire for a year. I returned to study social history at Iowa State University, where I graduated after two years and eight months, with honors and a G.P.A. of 3.56. Among several others, I concluded an independent study, the thesis of which the Des Moines Sunday Register published. In it, I advocated the widespread use of wind mills across the state, soil conservation and cultural revival. Old Timers said that wind energy was “a pipe dream” and my calls for rural revival were “quaint but in vain.”

After completing a master’s degree in Cultural and Political History at Vermont’s Goddard College, in July 1991 I left a teaching post at a private school in New York to teach at then-existing Czechoslovakia with the Peace Corps. After completing my two-year stint as an instructor at Ostravska Univerzita, I moved to Berlin, where I earned a Ph.D. in Modern European History at Humboldt Universität. 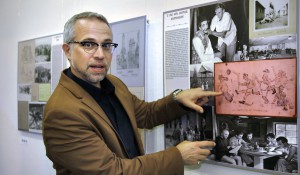 It was during my doctoral studies that I began to document Iowa’s connections to Nazi Germany: the Jewish and other refugees at Scattergood Hostel near West Branch, U.S. prisoners of war held in the Third Reich, German POWs held in the Camp Algona system, Anne Frank’s pen pal near Burlington and dozens of other first-person accounts of encounters between the Midwest and Germany. Old Timers deemed by research into Iowa’s WWII-era history “an interesting hobby” but advised “get a real job.”

On the 11th of September 2001, by coincidence, I launched the TRACES Center for History and Culture project, which ultimately brought these regional histories to hundreds of thousands of people in all 99 Iowa counties and in 26 U.S. states in the form of mobile exhibits housed in two “BUS-eums” as well as lectures, conferences, cross-cultural exchanges, films series, concerts, publications and other forms. I featured Iowa stories on speaking tours in Australia and New Zealand, South Africa, Uruguay, England and Brazil. In 2011 I co-founded Spuren e.V., a German affiliate to carry out TRACES’ work in Europe; in part, it works with refugees seeking a safe haven in a Europe divided by their presence. 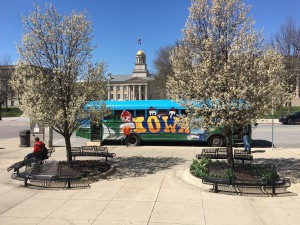 The driving motivation throughout my adult life has been to connect people alive today to each other, to voices from the past and to dreams of a better shared future. It also leads me, now, to run for the US Senate from the great state of Iowa. While working to raise Iowa’s profile on the national stage, I seek to help Iowans find ways to recreate our homeland’s political landscape, to empower all citizens as we craft new ways of living that are more cooperative, less taxing of our natural resources and that redress unjust imbalances between those who create wealth and those who unfairly amass and misuse it.
As I believe that no public servant should hold any one elected office more than a dozen years, over the two terms that I’d like to serve in the U.S. Senate, I will advocate on behalf of both rural Iowans and the residents of our ascending urban areas. I will advance the interests of genuine family farms over those of agri-business giants, of students who want a decent future unencumbered by lifelong debt, of seniors wanting to enjoy their last decades with integrity and dependable healthcare. More than legislate, I seek to facilitate Iowans finding solutions to our own problems, offering a hand up rather than a hand out.

What follows is a sample of both press coverage and press releases related to Michael’s campaign for the US Senate seat from Iowa currently occupied by Charles Grassley. First, the press release…

…and biography distributed to the media prior to the Announcement:

An early Knoxville radio interview (11 May 2016) spelled out his motives and goals, as did a later feature (6 September) on Iowa Public Radio’s “River to River” program.

an Ol’ Boy in a skirt

Only after being challenged as to why it didn’t report Michael’s candidacy right after the announcement, Iowa Public Radio did report it–some ten days later. This “oversight” was only one of myriad examples of how independent candidates’ runs are actively obstructed:

Still, the candidacy continues… despite the

Such intentional sidelining, however, would not go unchallenged. Stay tuned for more!