campaign brochure as a PDF:   ML-T for US Senate brochure 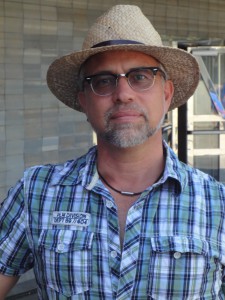 Friend, we have ten years to reform our world—period.

If we don’t find effective ways within the next decade to manage the spectrum of crises now facing us, we won’t survive—mid-term certainly not intact as a society and, long-term, likely not viable as a  species.

We can’t wait for supposed messiahs—of any political stripes—to appear to “rescue” us: We must shift into self-rescue mode and take direct, daily responsibility for the well-being of our families and ourselves.

Only by reclaiming power from those who we’ve allowed over time to usurp the public forum can we muster the means to make meaningful changes in our communities and, subsequently, in our world.

Our current systems (political, economic; for food, energy, healthcare, education, justice, etc.) arose during eras with different realities; the political parties are calcified remnants of those fading eras. They don’t move us forward, but are in the way: They must go—now. 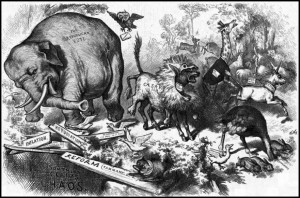 Harper’s Weekly cartoon of 7 November 1874, with the caption:
“An Ass, having put on the Lion’s skin, roamed about in the Forest,
and amused himself by frightening all the foolish Animals he met
with in his Wanderings”—Shakespeare of Bacon; by Thomas Nast

INTRODUCTION:
It all began with a dream I had recently about the end of the world:

No, not through Armageddon-like wars or cataclysmic weather “events”—nor through raging epidemics, global financial meltdown or societal collapse. Rather, our muted, slow-train end came through an underlying, subtle void in which no one cared enough even to come together for dinner. more ...

In the dream, I was in an urban commune, visiting a group of people who supposedly chose to live with each other. It was Sunday and each was doing her or his own “thing.” Still, no one—despite my many ardent pleas and cajoling—cared enough about each other or the state of the whole to pause long enough to share a meal or to stop and hear or truly see each other: Everyone I encountered seemed a babbling, self-absorbed pile of misery.

This sobering scenario set loose in me deep despair and an uncomprehending sadness. When I opened my eyes—though I actually wanted to stay in bed and hide from the world—I whipped back the covers, stood up, went to the bathroom, brushed my teeth, opened the windows to let in some fresh air, poured a big cup of tea and sat down to type out a road map for our shared salvation. (I did so on Saturday morning, the 9th of January 2015—ten days after on New Year’s Eve the North Pole’s temperature, incredibly, hovered over the freezing point, some 50 degrees above its seasonal norm!)

This is the result, and:

This is all about you—and me.

PREMISES:
As you know—as we all know—you and I are in a bad way, for we live in a world in slow-motion freefall. Wars and weather disasters of biblical proportions—and the millions of refugees displaced by both—are alarming enough, but more subtly our communities, our families are imperceptibly yet literally drifting apart. Distracted by hollow amusements and numbing media, we mask a core emptiness with insatiable material consumption, washed down with junk: junk calories we ingest with junk food; junk bonds and junk mortgages that for a decade have left our economies fundamentally anemic and vulnerable; junk fuels; closets and basements, garages and storage units full of junk we rarely use yet can’t let go of; junk information on junk websites outdone in their inane senselessness only by junk ads on junk television.

As a group, our youth exhibit signs of zombie-ism, often unable to communicate well or solve problems; more and more adults withdraw from civic bodies and disengage from the developments around us. We are sinking into a spiritual poverty as great or greater than any material paucity our ancestors knew: We have all these gadgets and relative wealth, but too little time or few intimates with whom to enjoy it all.

While societal failure is enough to threaten our doom, the accelerating ecological collapse is unleashing weather “events” of cataclysmic proportions, but creeping, low-level attacks on our fragile biosphere in the form of debilitating viruses (think Zika) and massive die-offs of species we need (bees, trees, grains and fruits or vegetables) to survive, let alone thrive.

Despite the rising crescendo of shrill and gnashing crises, few bodies step forward with meaningful and achievable solutions. Politicians—largely disdained by most of those they claim to represent—meet at cozy conferences and wring their hands on our behalves, yet their loudly touted resolutions seem to make little if any difference. And, that is understandable: While the corporate whores who’ve hijacked much of the body politic seem skilled at making matters worse, they are more symptoms of a deep rot, rather than its cause. They’re not the fundamental problem: We are—as well as being the sole solution.

The politicians—pawns bankrolled by a cynical elite—issue grand resolutions, puff out their chests and gloat over their meaningless gestures, yet it is you and I, on the ground, who decide what products to purchase, in what form and how much fuel to buy, what food to fork into our mouths, what box we check at the voting booth. They are the ones to profit from our guarded apathy and resultant inactivity, yet we are the ones who blindly hand them the money that feeds the beast that sits atop us all. They order then steer the wars, yet we pay for them and send our children to fight, to kill or be killed in them. They meet behind closed doors and make decisions that affect us all, yet bait us with titillating “issues” that belong in our bedrooms, rather than offer open accounting of what they do in their board rooms.

PROPOSALS:
We haven’t much time—a decade, at best—to turn around the state of our worn, weary world. At the end of the next decade, either we homo sapiens will have reduced our impact on the only Earth we have or we won’t. If we don’t, our (grand-)children, nieces and nephews, neighbors—and ourselves as aging co-culprits—will occupy an increasingly hostile and, at some tipping point, for-us uninhabitable planet.

If we do succeed in taking control of our destinies (Is there really any other, tenable option?), it will not be through periodic global summits yielding “target” measures imposed from the top down. Instead, it will arise through self-selected steps chosen at the bottom, so far-reaching that, in aggregate, they tip scales. And, it will be through forging a new political culture to replace an outdated one born centuries, even millennia ago (already in ancient Greece and Rome) that never imagined citizens wired to each other, with the means to fulcrum their own power and self-govern. Today governance is still through legislation from the top, but if we are to take our fates into our hands it will be most of all through facilitation from the bottom: We must stop looking for messiahs and become the masters of our own fates—together… perhaps while once again breaking bread with each other as we break “the impossible” down until it becomes possible.

This campaign was focused on two possible models—one for cultivating a new civic culture through local, “micro” political bodies to replace (in the US) two calcified giant parties that have degenerated into mere power-brokering syndicates that block actions being taken rather than enable them. The second model consists of sample proposals of how ordinary citizens can select, then measure and monitor their own efforts to recalibrate how they—how we!—consume natural resources, create new ways of living and establish a sustainable human existence that will allow our embattled Earth to regain its balance.